Everything You Need to Know About Montgomery Ward Sewing Machines

Here, we answer some of the most common questions about Montgomery Ward and their sewing machines.
By
Jean Chaney

JustToSew is reader-supported. We may earn a commission through products purchased using links on this page. Learn more about our process here

If you are interested in learning more about Montgomery Ward sewing machines and finding important information about where to find them or how to take care of them, you are in the right place!

This article provides a great introduction to Montgomery Ward vintage sewing machines, the most popular models, their timeless charm, and other useful information regarding getting one for yourself. 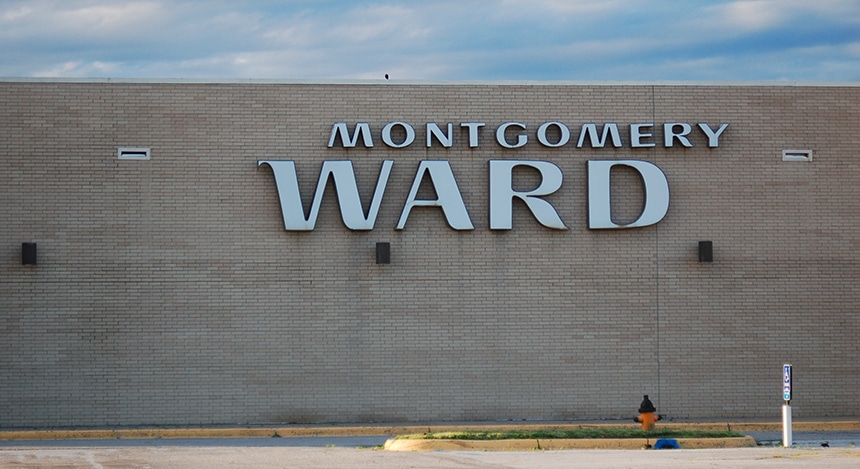 They are also known as the Signature series sewing machines, owing to their impressive design, sturdy heavy-duty construction, and metallic charm. One interesting, yet shocking fact about these famous sewing machines is that the company did not manufacture any of their sewing machines!

Outsourcing manufacturing from international, especially Japanese companies was an obviously profitable opportunity that led Montgomery Ward to also be able to establish itself as a winning competitor in the market by charging less for top-of-the-line sewing machines.

An interesting fact remains that Japanese models often followed after Singer sewing machine designs but delivered even better machines that were so-called Singer rip-offs, proving quite profitable and economical for Montgomery Ward.

However, before the shift toward Japanese manufacturers, Montgomery Ward featured a variety of others as well. 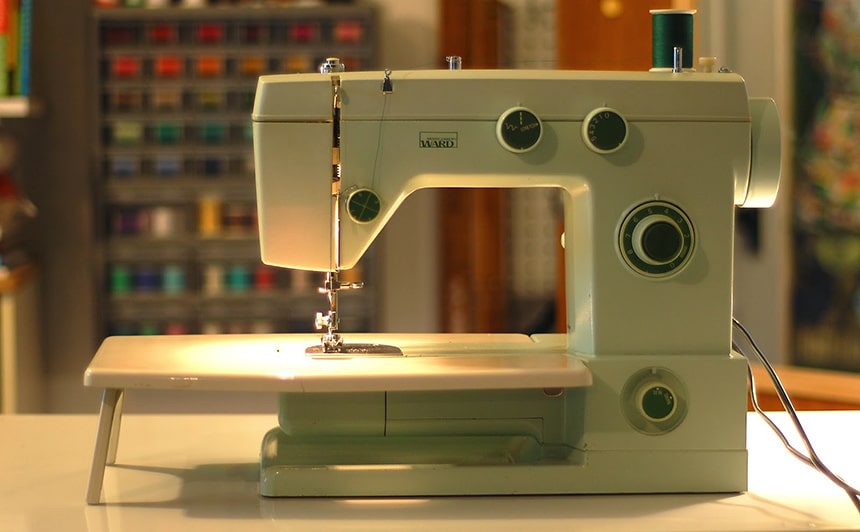 There are some famous Montgomery Ward models that people still use or buy today, which remain functional despite years of use.

One such model is the Montgomery Ward Sewing Machine 1980. This model is one of their best ones, with a simple design that is great for beginners. Its compact dimensions also make it easier to use and store.

The plastic construction of this model makes it lightweight, yet durable. It is also a very versatile model, which is reflective of the many features that were common in its time.

The only problem is that the instructions manual is difficult to find, and it is needed for maintenance and set up, like threading the bobbin.

Another model that people still use today is the Montgomery Ward Model 1984. This machine was part of the signature Montgomery Ward collection and therefore has superior construction that speaks of its quality. It was manufactured by the infamous Japanese company Happy and sold between the years 1960 to the 1980s. This model is a typical Japanese style, with simple and sturdy features that make it a convenient sewing machine, especially for home-based users.

However, it may be difficult to find spare parts for this particular sewing machine.

Lastly, the Signature Sewing Machine model UHT J277 by Montgomery Ward is still found and used by vintage sewing machine collectors. This model is part of a high-end line by Montgomery Ward, which makes it sturdy, with high quality, long-lasting parts, and great design. These are also those rare models, whose instruction manual may still be found easily, unlike the other two models we have mentioned above. You may also be able to find spare parts for this model on eBay or with other sellers elsewhere.

How Old Is My Montgomery Ward Sewing Machine?

Passionate sewers often buy a vintage sewing machine when they come across one, especially Montgomery Ward machines and models by Singer that are no longer manufactured.

An expert tip to find how old one’s sewing machine actually is to simply Google the model of the sewing machine, by punching in the serial number of your machine into the search engine and accessing the online registries that indicate the manufacturing date of these machines.

However, this can sadly not be done with Montgomery Ward sewing machines since the registries for their models are not available online. 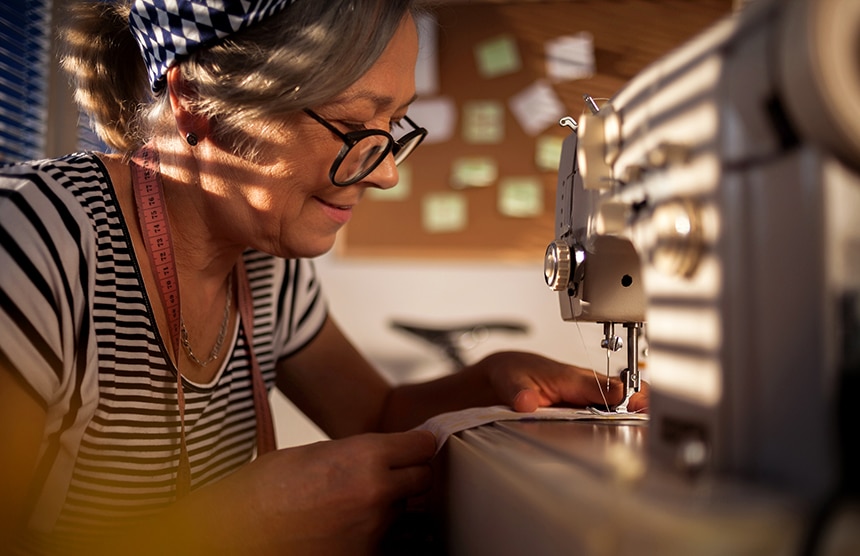 However, there are four ways to find out the age of your Montgomery Ward sewing machine. The simplest way would be to locate the manufacturing date on the manual that comes with the machine, however, the problem with vintage machines is that they usually don’t come with an instructions manual because people preserve the machine but forget to keep the book safe.

If you do not have the pamphlet, do not worry because there are other ways to tell how old your machine is. You can Google the different models and find the one that looks the same as or very similar to the one you own. Starting here, you can proceed to follow the web trail that will eventually tell you how old the model in the picture on Google is. This may not always work, so another way is to look for a Montgomery Ward sewing machine model similar to the one you own on eBay.

You can try searching for the serial number of your machine and find a seller of the same model, who hopefully has published information regarding the antiquity and manufacturing date of the machine as well. If none of these techniques prove fruitful, you can always get help from fellow sewing enthusiasts, who gave the knowledge regarding vintage sewing machines. Joining a discussion forum for sewing and quilting may just get you your answer!

How Much Is a Montgomery Ward Sewing Machine?

Montgomery Ward sewing machines are highly coveted machines among sewers, not just because of their antique charm, but also their excellent performance, durability, and easy maintenance.

Certain signature models, even today, can be bought for a mere $100! For enthusiasts, this is not a very high price to pay, especially considering the high functional value and performance of Montgomery Ward vintage sewing machines.

Other determinants of the price of Montgomery Ward sewing machines can be the original parts and accessories that it comes with. If these items, such as feet, maintenance tools, and a functional original motor of the machine are included with the machine you buy, the price might be higher. In case any of these accessories are not included or require replacing due to poor condition, you may be able to get a Montgomery Ward sewing machine for really less!

One thing to note about these machines is that they are not very well reviewed because they are not compatible with the sewing designs and styles of today’s age, which is another reason why these sewing machines are not as expensive as other vintage collector items.

However, antique items have a place of their own, which is often higher than vintage because they do not rank based on their functionality but by their historical charm. This is why antique sewing machines are usually bought as a collector item and not for actual sewing, costing more and ranging up to $500.

Any model of the Montgomery Ward sewing machine that is dated before the 20th century would classify as an antique; however, price determinants such as the condition of the machine would still factor in.

Where to Buy One?

Great vintage builds, age like wine, gracefully and increasing in value and demand over time because they have a timelessness that cannot be matched. Similarly, since Montgomery Ward sewing machines are no longer manufactured and the company has gone out of business, these sewing machines can be quite difficult to find.

Furthermore, despite some models of the Montgomery Ward sewing machines that have lasted for longer than 6 decades, not all of their sewing machines have been this successful and durable over the years.

Where Can I Get the Manual? 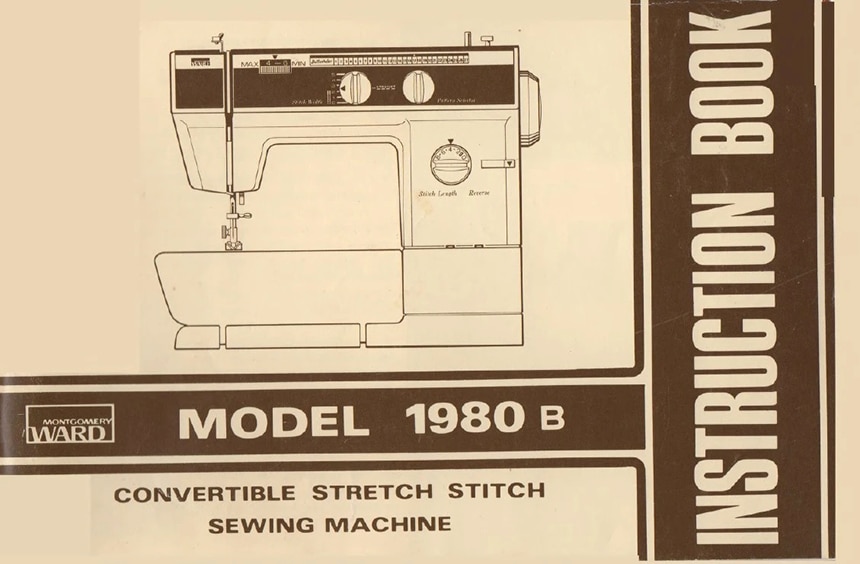 An instructions manual or an owner’s pamphlet is a useful item that comes with most appliances and other products, providing users with basic information and guidelines for setting up, maintenance, and usage of the item. The problem with vintage sewing machines like the Montgomery Ward machines is that they usually do not come with a manual, since original owners usually misplace it.

Some companies offer all the information available in the manual on their websites, which can be easily accessed. However, unfortunately, Montgomery Ward does not sell sewing machines any longer, therefore information manuals for their older sewing machines are not available on their website. You can try to look for these books online at stores, such as eBay, or ask on sewing forums if someone has them. In conclusion, it is quite difficult to find the manual for a vintage Montgomery Ward sewing machine.

Montgomery Ward sewing machines are popular for their timeless charm and durable construction that keep them functional even after years of usage. They are usually collected by sewers who sew as a hobby and do not require very sophisticated or complicated stitching.