Can't decide between Juki and Singer? We compared them for you.
By
Jean Chaney

Can't decide between Juki and Singer? We compared them for you.
JustToSew is reader-supported. We may earn a commission through products purchased using links on this page. Learn more about our process here

Juki and Singer are two very well-known brands of sewing machines that both offer premium quality but are often distinctive in the features they provide. In the Juki vs Singer competition, there is no clear winner, as both brans offer a selection of durable sewing machines that are suitable for every kind of user, ranging from beginners to experienced crafters.

Singer has a bigger market share than Juki and is a name that is instantly recognizable, but Juki manufactures very durable, rugged machines that are powerhouses you can use either in your home or even in a professional setting. This comparison of Juki vs Singer sewing machines compares the two brands and highlights their main strengths so it’s easier for you to make a choice.

Juki and Singer are both well-known brands in the industrial sewing machine, and both companies have a long history.

Juki is a company that was founded in 1938 in Japan and today it has headquarters in Tokyo and multiple manufacturing units in Japan, Vietnam and China. Because Juki sewing machines offer great solutions for both beginners and professionals, they are incredibly popular across the world, and in fact 40% of all garments in the world are made on a Juki machine.

Singer, on the other hand, is an even older company with a history that goes back to the 1850s. The company was the first to develop sewing machines for domestic use. Until Singer, sewing machines were heavy and bulky machines that were only used in industrial settings, but once they became small enough to be used at home, they became incredibly popular. By the beginning of the 20th century, Singer sewing machines started to find their place in every home.

Both Singer and Juki currently produce multiple types of sewing machines, and while they are all quality machine, choosing the best machine for your needs largely depends on your particular needs and budget.

Juki offers high quality stitches, but the machines may sometimes be more difficult to master if you’re a beginner. On the other hand, Singer sewing machines offer a comparable stitch quality to Juki but they are often more user friendly than Juki. As such, if you’re someone who hasn’t been sewing professionally, you may be better off with a Singe. However, if you have no problems figuring out complicated setup tasks, a Juki machine would be a good choice.

Both Juki and Singer machines are highly versatile, and many of them are a suitable choice for general sewing projects and also for quilting. Some models are even suitable for small embroidery work and overall are suitable for users who want to work on a variety of sewing projects.

Singer sewing machines are generally heavy duty, but Juki are the best choice for those who need a powerhouse machine. Some Juki models boast sewing speeds of 5,500 stitches per minute or even higher and they do a great job at handling thick fabrics and large-scale projects. On the other hand, if you’re looking for a machine that can also handle embroidery, Juki doesn’t excel much in this department and Juki would be a better choice.

Another difference between Juki vs. Singer is warranty. Juki offers a 5-year mechanical, 2-year electrical warranty, whereas Singer sewing machines come with a 25-year mechanical, 5-year on motor and electronics, 1-year on attachments warranty. You will have to register your sewing machine with Juki in order to be covered by the warranty, and you can do the same with Singer, even though that’s not mandatory and you will be covered with just proof of purchase.

Juki and Singer both offer comparable models in various categories, but choosing between the two manufacturers depends on the features you’re looking for in a sewing machine, your level of experience and your budget. Let’s have a look at some popular Juki and Singer models and see how they compare.

The Juki HZL-F600 and SINGER Quantum Stylist 9985 are both computerized sewing machines that come with a wide range of features that make them suitable for experienced users who want to use them for complex projects or even in a professional setting.

The SINGER Quantum Stylist 9985 is the clear winner when it comes to the number of stitches, as it comes with no less than 960 of them. In comparison, the Juki HZL-F600 only has 225 stitches, but you will find that they are versatile enough for just about any type of job. However, if you’re looking for extra diversity, the SINGER Quantum Stylist 9985 will provide that for you.

The Juki HZL-F600 and SINGER Quantum Stylist 9985 have the same stitch length and width, so you can’t go wrong with any of them. These are 5 mm for length and 7 mm for width, which makes the machines suitable for most projects. 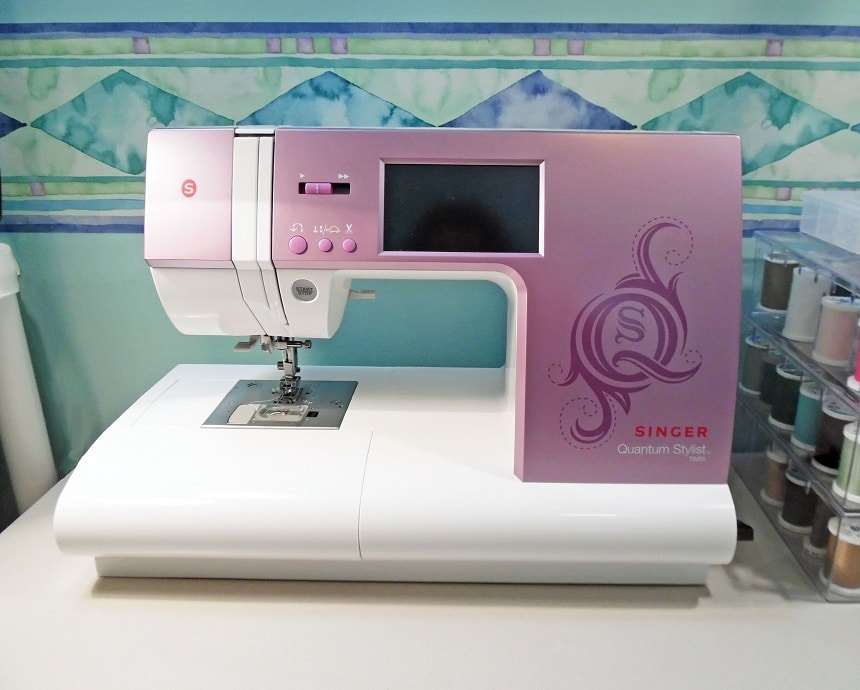 Both the Juki HZL-F600 and SINGER Quantum Stylist 9985 have a free arm that can help you with items such as pants legs or any other large or circular project. The free arm is collapsible in the case of both models.

An LCD display makes it easy to see settings and make any adjustments you need easily in the case of both the Juki HZL-F600 and SINGER Quantum Stylist 9985.

The two sewing machines have comparable weights, with the Juki HZL-F600 clocking in at 21.6 pounds, and the SINGER Quantum Stylist 9985 trailing behind at 20 pounds.

The Juki comes with a 5-year mechanical and 2-year electrical warranty, while the Singer boasts a 25-year mechanical, 5-year on motor and electronics, and 1-year on attachments warranty.

The Juki HZL-LB5020 and SINGER Sew Mate 5400 are both computerized sewing machines with a simple finish and intuitive to use, which makes them ideal for all levels. They have comparable features and specifications, but there are also some things that set them apart.

In terms of speed, the Juki HZL-LB5020 and SINGER Sew Mate 5400 are quite similar, with the Juki offering up to 700 SPM and Singer a bit more at 750 SPM. The speeds are more than enough for those who want to tackle larger projects.

The Singer is the winner here as it offers 60 different stitches, whereas the Juki only has 20. Both machines have an auto needle thread feature, too.

The stitch length and width of the Juki HZL-LB5020 and SINGER Sew Mate 5400 are very similar, with the only difference being that the Juki has a stitch width of 7 mm and the Singer only has a 6.5 mm one. 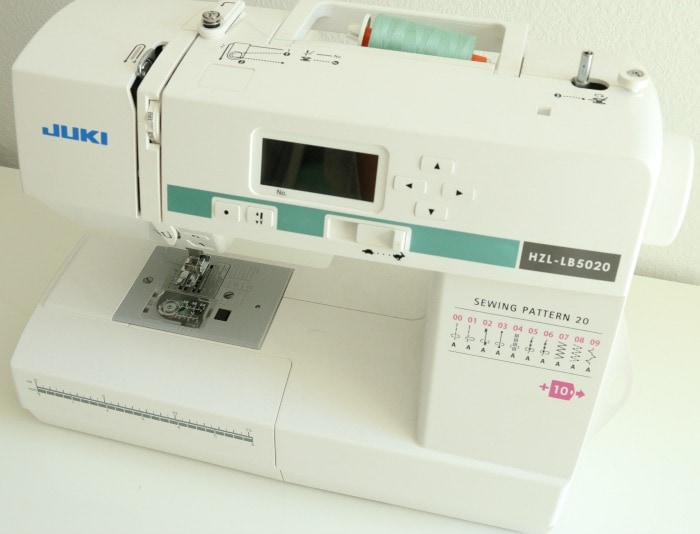 The Juki HZL-LB5020 and SINGER Sew Mate 5400 both come with a free arm for extra versatility for your projects.

If you’re looking for more than one buttonhole, the SINGER Sew Mate 5400 is the winner, as it has four buttonholes, whereas the Juki HZL-LB5020 only has one.

An LCD display helps you see settings and choose stitches with both the Juki HZL-LB5020 and SINGER Sew Mate 5400. The size of the display is similar in the two machines.

The Juki HZL-LB5020 and SINGER Sew Mate 5400 have approximately the same weight and they are lightweight enough not to pose problems when you want to transport them.

The Juki comes with a 5-year mechanical and 2-year electrical warranty, while the Singer is the better choice in this department with a 25-year mechanical, 5-year on motor and electronics, and 1-year on attachments warranty.

The Juki HZL-353ZR-C and SINGER 4423 are heavy-duty sewing machines that allow you to perform both simple and complex operations with ease. They both come with a vast array of features and powerful motors to handle any project you may want to throw their way.

The number of stitches is similar between the two sewing machines, with the Juki HZL-353ZR-C featuring 21 stitches and the SINGER 4423 offering a selection of 23 stitches. For both machines, the stitches are a combination of basic and decorative sewing.

Both sewing machines have a 4 mm stitch length, but the stitch width differs a bit, with the Juki HZL-353ZR-C being 7 mm while the SINGER 4423 is a 6 mm one. 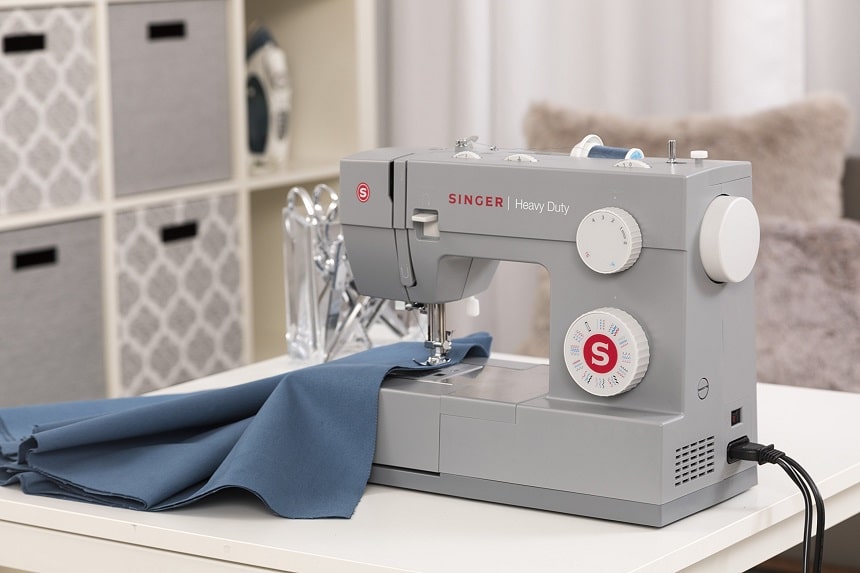 The Juki HZL-353ZR-C and SINGER 4423 both have a free arm to help with any circular projects you may want to try your hand at.

It’s a tie in the buttonhole department, with both the Juki HZL-353ZR-C and SINGER 4423 offering a single buttonhole.

None of these two sewing machines have an LCD display, but the handy knobs make it super easy to navigate through the settings in an intuitive way. The SINGER 4423 makes it easy to select the stitch you want with the Stitch Selector Dial and the Juki HZL-353ZR-C has a similar dial.

The Juki HZL-353ZR-C is a bit heavier at 15.7 pounds, while the Singer 4423 only weighs 14.5 pounds. They are both lightweight enough to transport easily and move from one room to another as needed.

The Juki comes with a 5-year mechanical and 2-year electrical warranty, while the Singer boasts a 25-year mechanical, 5-year on motor and electronics, and 1-year on attachments warranty.

There is no clear winner in the Juki vs Singer contest, simply because both brands manufacture quality sewing machines that serve the needs of beginner and professional users alike.

If you’re looking for a durable, more rugged sewing machine that can handle just about anything you may throw its way, a Juki would be the perfect choice for you. However, if you’re interested in a longer warranty, Singer is definitely the better choice between the two manufacturers as it offers a 25-year warranty.

The choice between the two brands would ultimately depend on your personal needs and budget, with Juki being a better choice for professional sewing projects, and Singer being great for beginners and sewers on a budget.