Jean Chaney
Jean is the brains behind her fashion label. She's a whiz with a needle and thread, and has been sewing since she was old enough to hold a pair of scissors. Jean has always loved working with textiles, and has turned her passion into a successful business. Jean runs her own sewing studio, where she oversees all the work that goes into creating her beautiful garments. She also shares her knowledge and expertise in a popular blog, which helps aspiring sewers learn the ropes. Jean's team of talented sewers are some of the best in the business, and regularly produce stunning pieces that exceed expectations.

JustToSew is reader-supported. We may earn a commission through products purchased using links on this page. Learn more about our process here
By
Jean Chaney

Another notable element is that it is a limited edition sewing device that also happens to be partnered with project runway. This implies that this is a dependable machine for all types of design and craft jobs. After all, if it is good enough for fashion designers, it must be good enough for home projects and craftwork as well.

Ultimately potential buyers want to know if the machine would work for them. Since we already reviewed the device, you should keep reading to learn more about our findings.

It’s almost expected that the more features a sewing machine has, the more expensive it will be. However, for the Brother XR9550PRW, you just might be surprised by the affordability. Also, there seems to be quite a lot to look forward to for people eyeing the device as a potential purchase.

From the features listed, most people would say that it is an enthusiast machine. This can also be seen in the fact that it was used for Project Runway. Nevertheless, this doesn’t disqualify newbies and novices from using the tool. There are some features included to help them navigate the device. 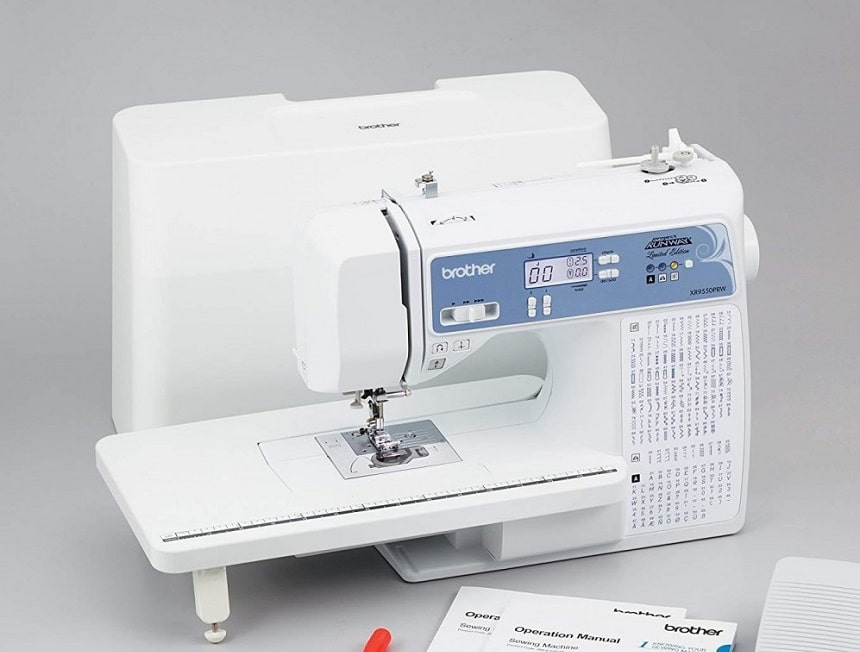 The design of the Brother XR9550PRW is, of course, the first thing you’ll see when you open up the package. The LCD display is one of the first things that will catch your attention. With this, you can see the stitch type you’ve selected before you start sewing. Additionally, since it is backlit, it doesn’t matter the lighting situation in the workshop. You should still be able to see the information displayed.

Also on the front of the machine is a speed slider that you can use to determine the speed of your stitches. However, there is an upper limit which is 850spm. This is seemingly standard for a lot of the pro and enthusiast sewing machines of the same caliber. In addition to the slider, there should also be a bunch of buttons with varying functions. These can even be used to program some of the functions of the tool.

On the lower side of the sewing device, you find stitch selection instructions. There are 110 stitch types, some of which are auto-size buttonholes. In addition to that, 55 alphanumeric sewing stitches are included. All these are displayed on the machine, so you needn’t refer to the manual every few minutes.

Also, the manufacturer included a picture on the machine with instructions on how to wind the bobbin. Another aspect of the machine’s design is an included wide table. Whenever you’re sewing large projects, this table should come in handy. However, this table also comes off to reveal a free arm. As such, users are sorted if they intend to sew sleeves and pant legs.

Lastly, an easy-to-use drop-in bobbin holder is part of the machine’s build.

The Brother XR9550PRW seems to outperform many other machines in the same price range. It sews smoothly, and that is one reason it is preferred by pro sewers. Also, the performance seems good enough to tackle a variety of fabrics. Even if you were to have trouble with thicker fabrics, it’s probably because of the needle and not the machine. That said, there are more heavy-duty machines out there if you intend on sewing thick, difficult fabrics daily.

Additionally, the machine seems to take instructions very well in terms of changing the stitch type and the speed. There are also extra features in this Brother XR9550PRW quilting and sewing machine that add to the performance. One example is the trouble-shooting feature. If you’re using the machine and, for some reason, it won’t sew, all you need to do is look at the screen. The built-in error system might be able to tell you what the problem is.

Another performance perk of the machine is the programmability. This especially comes in handy when you’re using the monogramming stitches. You can prompt the tool to sew letters and symbols consecutively rather than sewing them one at a time.

For a device of this caliber, the ease of use is remarkable. It even makes it so that beginners and novices don’t have to struggle. There are many features to help out, with the picture on top of the machine being one. This makes it so you can easily wind the bobbin.

Also, the buttons are well labeled, and the stitch types are indicated on the machine. As such, you’ll likely not need to look into the manual before you change the settings. The screen also comes in handy to tell you what stitch type you have selected.

In addition to that, once you’ve settled on a stitch type, the machine should tell you what foot type to use. Just match the letter on the screen with the letter imprinted on the sewing foot. Another benefit is the inclusion of error messages on the screen. These notify you whenever there is a problem that the machine can diagnose, such as a tangled thread. As such, trouble-shooting becomes so much easier when you’re aware of the problem.

Nevertheless, you still may need to read the manual and watch the instructional DVD to know how to get the best out of the machine.

In terms of sewing speed, the Brother XR9550PRW does not lag behind. It features an 850spm maximum stitching speed which is quite fast by most people’s standards. This allows you to finish your projects on time. However, for projects that need extra care, you might want a slower speed. Consequently, the speed slider is a great feature to have. However, this only works if you use the start-stop feature for sewing. Alternatively, there is the option of controlling speed using the foot pedal. 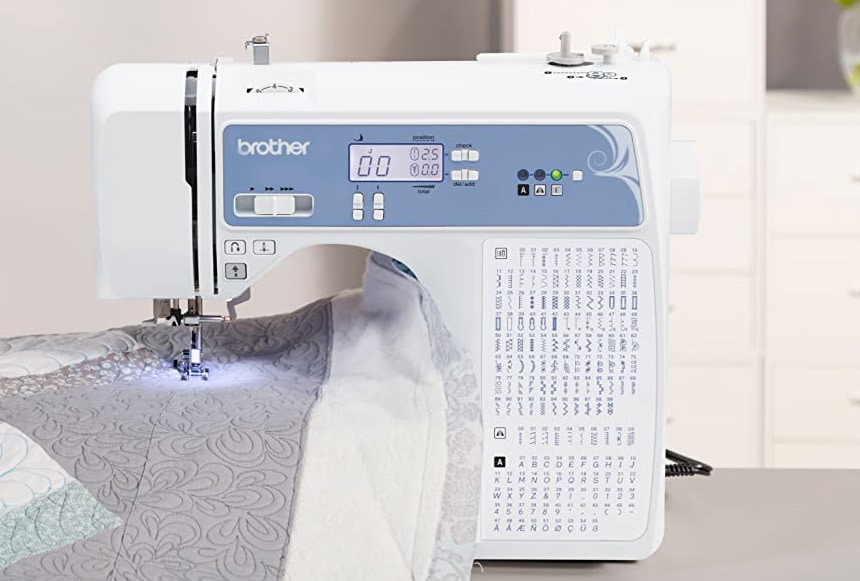 The Brother XR9550PRW incorporates 110 different stitching patterns in its design. Eight of these 110 stitches are different types of auto-size buttonholes. The other 102 stitches are more than enough to get you through everyday sewing. However, the built-in stitches don’t end there. There are an additional 55 monogramming stitches that incorporate letters, numbers, and symbols.

A point to note is that the monogramming stitches are limited to only one front. This limits the machine’s embroidery potential. However, the Brother XR9550PRW with its 165 total built-in stitches is still a step up from the Brother XR9500PRW predecessor, which has 120 stitches.

The maximum stitch length and width for the Brother XR9550PRW stands at 5mm and 7mm, respectively. You would be hard-pressed to find projects that require any more than this. Also, you can reduce or increase the stitch length or width at will using the buttons and controls provided.

However, many users of the Brother XR9550PRW believe threading this machine is much more complicated when using the threader than without. As such, they end up reverting to their trusty eyes and hands.

Others seem to prefer working with the threader. Since opinions are split on the topic, it might be up to you to determine how you feel about the threader after you’ve used it. In the worst-case scenario, you might have to invest in a third-party needle threader. Fortunately, they are cheap and easy to acquire if needed.

Another aspect to potentially get excited about is the large working area of the Brother HC1850. As mentioned above, there is a wide table that comes with the purchase. This will definitely be handy for larger quilt projects. However, the table is not a permanent attachment, and you can remove it whenever you need to work on something tubular. This would leave the free arm exposed. Also, the free arm is lifted slightly above the base of the machine, which makes it easier to use.

This machine follows the pattern of other high-end Brother sewing machines in that it comes with LED lighting for the sewing area below the needle. Consequently, you can see where you’re stitching at all times, and if there are issues, you will know to make corrections. Also, a well-lit surface should make it easier to pull off freehand sewing.

Despite the impressive lineup of features included, the machine isn’t bulky, which is a surprise. As such, it makes for an easily portable purchase that is great for holidays, sewing classes, and more. Additionally, the manufacturer includes a hard carry case that allows you to move it from place to place without risking damage.

The warranty and guarantees included with this purchase are quite standard for Brother sewing machines. For one, the body of the Brother XR9550PRW carries with it a guarantee for 25 years. It’s a different case for the other machine components. For example, the parts, labor, and accessories are covered for the shortest time, which is one year. Lastly, there are the electric components that come with a two-year warranty. Overall the warranty seems pretty comprehensive, but you will need proof of purchase to make a claim. 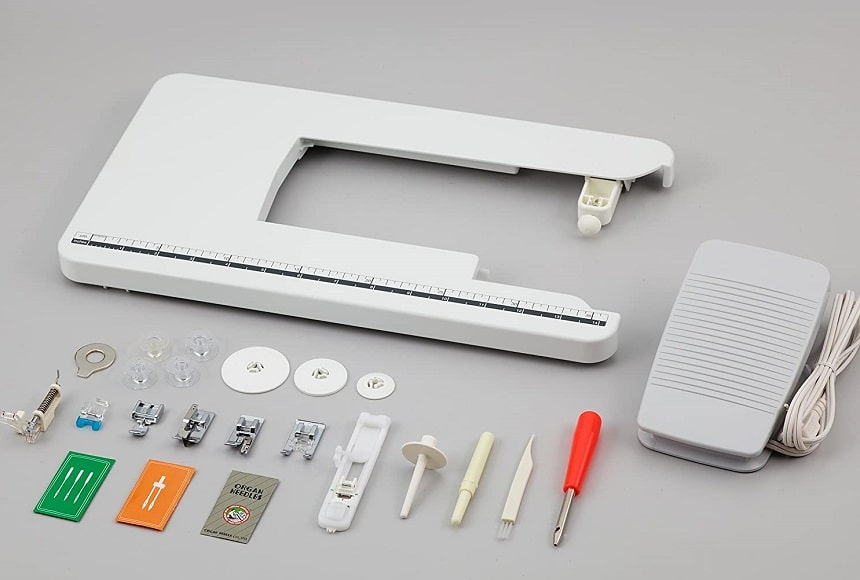 Potential buyers of the Brother XR9550PRW should also look forward to the accessories that come with the machine. The wide table and hard carry case have already been mentioned above, but they’re not the only accessories. Others are the sewing feet, instructional DVD, manual, bobbins, spool caps, spool pin, needles, accessory pouch, eyelet punch, seam ripper, and even a screwdriver.

All these accessories are invaluable in your sewing journey, especially for beginners. However, the sewing feet are of particular interest since they determine the stitch patterns on the machine that you can select. There are eight included, although you could buy more if you wanted to. These eight are the zig-zag, quilting, button sewing, zipper, monogramming, overcasting, buttonhole, and the blind-stitch foot.

These are all quick-change feet that will attach and detach easily from the machine. As such, switching them out during a project becomes a cakewalk. If you’re unsure about which foot to use, the machine can provide some guidance. This is usually in the form of a letter on the screen once you’ve selected a stitch pattern. This letter needs to match with the letter engraved onto the sewing foot.

While the Brother XR9550PRW is more expensive than an entry-level device, the pricing doesn’t really reflect the value of the machine. Most sewers who’ve used and reviewed other machines would say that this is a relatively high-end model in terms of features. As such, the price tag is more than reasonable. Consequently, anyone who has the funds is highly encouraged to get it. However, we do emphasize that this is not an embroidery machine despite having a monogramming feature.

The Brother XR9550PRW sewing and quilting machine review above undoubtedly tells you all the positive and negative aspects of the machine. As such, coming to an objective conclusion on whether or not to buy the device should be easy.